Feedback: 68 / 0 / 0
While domain name speculators were registering up a hailstorm of "meta" names and even closing some large sales before Facebook's rebrand, a company that went by the name of "Meta.Company" has pushed back.

They had this to say on their homepage. 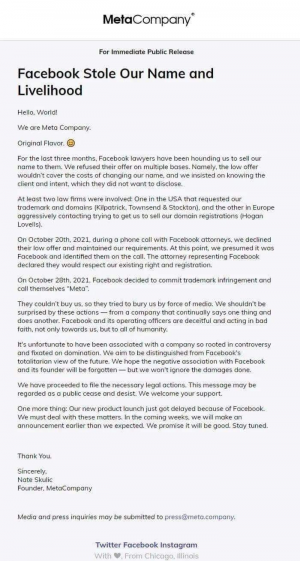 The company is stating that since Facebook was using all their legal brute force they could, Meta.Company had to slow down the delivery of their product.

This is where things for me get confusing. What is their product?

Meta.Company has been registered since 3-18-2014, but they have no record of creating a homepage with any product information or company information until the very first archived instance of the site on November 1, 2021. This coincidentally happened to be three days after the Facebook/Meta rebrand.

The alleged "real" Meta Company's social media presence was absent until the rebrand as well.

What is Meta.Company and what do they offer? Is Nate Skulic, the founder of Meta.Company, merely doing what Facebook attempted to do, except do it in a matter that is in the public?

It's of my opinion that Skulic saw dollar signs, and he saw a few too many; therefore, he pushed back publicly to garner more support for his case.

While I have to speculate that those are Skulic's intentions, I should point out that he does have a live trademark for "METACOMPANY" dating back to 2016. The address on file doesn't go to an office where you expect to see a thriving hardware/software company from 2016 though. It links back to a residential address.

With that said, the trademark and date can serve as a legal foundation for him to make a valid claim against Facebook. One could argue that Facebook did slow him down. However, I don't think METACOMPANY ever got off the ground to be slowed down, to begin with.

What do you think?
Start using the Number 1 domain registrar—Epik—today!​

The site looks to be dead and serve just one page. Idk what type of cost and valuation they are asking.

Feedback: 0 / 0 / 0
What exactly is the issue here? If this company would like to differentiate themselves from a "totalitarian view of the future", as they put it, then full speed ahead!

Have to love these trademark wars. Stuff gets revealed that determines for me whether or not that company will ever get my business in the future.

Feedback: 68 / 0 / 0
It kind of has a trademark domain squatter vibe to the whole thing. I mean, he did get the trademark for the domain. So, perhaps he learned to do that in a course or something. As far as business goes, the domain has been there since 2014 doing nothing all the way through their trademark in 2016, still, an empty page, to the days after Facebook rebrands. I kind of imagine that they wanted to sell the trademark with the domain at one point from 2016, and with someone knocking hard, it intrigued them. Then, they figured out that it was Facebook and are now asking for another zero or so. They believe they might be able to get this due to public pressure on such a small company that can't ship products because Facebook got in their way of development. It's all, just, off.

Feedback: 2 / 0 / 0
To me, it just reads as "We want money. MORE of it". That's it.
"Facebook is bad. It is evil" .... ('but we will gladly take their cash. In fact, the sole purpose of our outcry is to get more from them. We hope we did enough so that they want to put more zeros on this check which will make us shut the hell up. Yeah, we'll actually be pretty happy, but don't say this out loud').

Their "product" thing is only to point out the time they "wasted" with the lawyers wanting to give them money.
Now, it's very possible it's a huge waste of time, and the offers they have been receiving where too low. In the end, if the seller doesn't want to sell, that's a problem for the buyer wanting to buy. On the buyer's side, having such deep pockets and everybody knowing it, isn't very good for negotiating, that's probably true. The seller also probably knows they are in a very good position in this matter.

I wouldn't speculate how unreasonable the seller and/or the buyer may be. It's possible to be both ways.

Out of curiosity, I would also like to know more about this company: What they were doing, etc.

But not specific to Facebook then, if they got it all the way up in 2016. That would be more "''acceptable", IMHO. More some "investing" than "squatting" (I would tend to think it depends if it's targeting someone in particular or not).

I think it would be nice if there was a agree and a disagree button.
Acme Domains

mr-x said:
I think it would be nice if there was a agree and a disagree button.
Click to expand...

Reactions are quite robust. These are the default ones used with Xenforo. Surely can look into different types and styles for designs.

If you would, drop it in the suggestions forum so we can explore it further to how it should be implemented.
Start using the Number 1 domain registrar—Epik—today!​

Feedback: 0 / 0 / 0
I don’t understand why it was impossible to buy a domain and a trademark first and then announce a rebranding ..

oxhagener said:
I don’t understand why it was impossible to buy a domain and a trademark first and then announce a rebranding ..
Click to expand...

They most likely had control of the domain and trademarks under a different company's name prior to the rebranding. I'm not certain about the trademark, as I haven't searched the mark, but definitely feel that way about the domain.

I don't think Facebook would approach anyone as the seller would want an inflated price. They probably have a smaller marketing company do the bidding for them.
Start using the Number 1 domain registrar—Epik—today!​

Bought a Domain before a trademark......